iPin is a username and password that allows you to use Korean internet services, either private or public without revealing your Alien Registration Card number. Learn what it is and how to get it here.

Why is it Necessary?

In a country where thousands of people may have the same name and millions share their last name, it must have become necessary at some point to somehow validate people’s identity online. While being in a war with their northern neighbor, having such important intellectual property in their computers and having such a hostile environment around them, these issues may be difficult to comprehend for us foreigners. That’s where the need for a system such as iPin came to be. Don’t struggle too hard in trying to comprehend why they came up with such difficult systems: its something that only a Korean mind can comprehend, as we are too biased with our foreign values to actually understand it. For now, all we can do is tolerate it and respect it.

What is it exactly and what does it do?

iPin is basically a username and password that authenticates your identity. If you have an iPin it means that some official entity has validated that you are who you say you are online and you are somehow ‘approved’ to do business online. This business is as simple as shopping for groceries online, ordering Mcdonald’s or signing up for the Sejong City Ouling Bike Sharing System (which I will explain in a post later).

Although there are usually two ways to validate your identity, for Foreigners iPin may be the best. The other way is to introduce your cellphone number, but that doesn’t work as well as it should and it requires you have a cellphone plan. If you want to use prepaid plans the cellphone validations will most likely not work on any webpages, so you will be left out of many online Korean services.

For us Americans, it feels like a huge waste of time. Our passport should indicate that we are who we are. Even then, Korea has registered us as Alien Residents with the Alien Resident Card, so that should be enough. Online shopping is so simple in our countries, but here, online identity is another thing, so let’s move on to how to get it.

What do I need for iPin?

4. Internet Explorer. Chrome works sometimes but sometimes it gives rare errors, so just be safe and use IE.

How to get it?

1. With your bank. First, go to your bank and make sure that they have your alien registration number on their records. In our case as students, our bank accounts are opened with our passports before we have the resident card, so its important that you go and update it. Once you get that updated, go to your own computer and sign up for online banking. The bank will give you a card with codes and a username and password. In our case, Wooribank website works ok in english, but sometimes has failures in the signup process. If it just doesn’t work, try it in Korean or visit the bank and ask them for certificate. They can give you the certificate in a usb drive but you won’t learn to use online banking which you will probably like to use later. The certificate has a password associated with it. I strongly recommend you write it down.

. In this case, we will use the government’s iPin service which is conveniently in English: http://www.g-pin.go.kr/center/main/index.gpin There are nice guides in English so you know what to do. Just follow all the process. They will probably ask you to constantly download new ‘security’ software in your computer. You will have to do a lot of this so be patient, restart, reload, don’t lose hope.

3. Go crazy!!. Once you have the iPin, you can now verify your identity in any Korean website. You will need the iPin to sign up for Homeplus/Emart/Lotte deliveries and the Sejong City Bike System, among other things!

Extra tip 1: If you want to use your Korean account abroad or to shop in foreign websites, you have to fill out more paperwork at the bank branch and they could change your card to one that says Visa/Mastercard. You can do that in your bank visit! You do not need to change your card if you only plan to shop in Korean online sites. 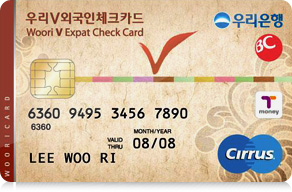 This is the first kind of card I got, this one does not work online.

After doing all the paperwork, I got this card at the bank with my name on it. This one works online and abroad.

Extra tip 2: Be very patient! You will probably have to go back to the bank many times as they could make mistakes in the capturing of your information. It happened to me, so be very patient with the bank and the websites!

Extra tip 3: Sometimes your computer will struggle with Korean language. If it happens and you only see “????” instead of hangeul characters, go to your computer’s settings and change localization to Korea. It will show the actual prompts in proper characters and you can read them and/or translate them. Also, don’t forget if it just doesn’t seem to work, try doing it in Internet Explorer.

If you get these strange characters, change your computers localization to Korea.